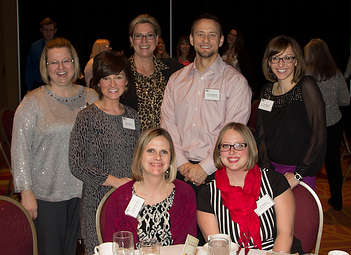 The CQuence marketing team won an award of merit at the 2014 Nebraska Public Relations Society of America (PRSA) Paper Anvil Awards Gala. The award was earned in the category of Business Products, events and observances (more than seven days).

CQuence received a paper anvil for work on the campaign surrounding Cassling’s 30-year anniversary celebration, held throughout 2014 to commemorate the company’s important milestone. In addition to a special anniversary logo, yearlong events were held for both customers and employees to place focus on Cassling’s continued focus on service and the customer.

“Winning the award was especially nice this year as we reflect on Bob Cassling’s 30-year vision and the unprecedented growth ahead for our companies,” said vice president of Marketing, Kathy Sullivan. “This was a true team effort and we are honored to be recognized by PRSA.”

Awards of merit were selected by judges as entries which met the stated goals and demonstrated good results, according to PRSA Nebraska. The 61 award winners were selected from a total of 111 entries received and included small companies, large agencies and student submissions. The complete list of 2014 award winners is available here.