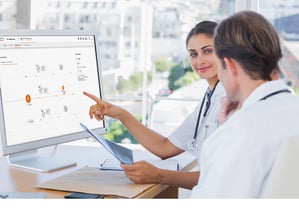 What’s in store for imaging departments in 2019? A lot, it turns out.

In fact, 2019 may go down as a critical year for both imaging and healthcare in general. A number of trends have already taken shape in the opening weeks of 2019 to position this decade’s last hurrah as one with unprecedented change. By the time 2020 rolls around, the landscape for imaging professionals may look quite different than it does today.

There is one caveat. Any one of the following topics has the potential to create dynamic shifts in the market or, with so much fluidity, they could bide time for another few years or be replaced in importance by something else entirely. That said, these are the trends that are already shaping imaging in 2019 and beyond.

This is the big one, and it affects healthcare organizations around the country.

CMS’s move toward site-neutral payments and the speed with which it has implemented new policies designed to shrink the pool of exempt facilities has been somewhat surprising. After roughly two years, many Hospital Outpatient Departments (HOPD) now find themselves coping with a completely altered Medicare reimbursement schedule than what they had anticipated, and there’s little recourse for those stuck on the outside.

The Advisory Board has put together a great fact sheet that spells out the specifics, but the biggest takeaway is this: if an HOPD was built after November 1, 2015 and is considered an off-campus, provider-based site over 250 yards away from the hospital, that facility can no longer bill based on the higher rates it’s grown accustomed to. Instead, HOPDs like this are subject to a 40% reduction.

This rule began back in 2017, but the finalized 2019 version of the rule makes it clear these payment reductions aren’t going anywhere. In fact, one particular wrinkle within the new rule actually will extend the site-neutral rate for hospital outpatient clinic visits to all HOPDs, even those that are otherwise exempt based on the qualifications listed above. The full 40% reduction will come online at the beginning of next year (right now, the reduction is 30%).

On the other hand, CMS is also extending somewhat of an olive branch to ambulatory surgery centers, expanding the number of allowable operations that can be submitted for reimbursement within those facilities.

Addressing disparities between payments and facilities providing essentially the same care is a stated priority of the current administration, so don’t expect the relative speed of such rule announcements to ebb any time soon.

The shift to consumerism is set to further take hold within healthcare policy and the public consciousness as a whole, and hospitals and imaging departments who enact policies to accommodate this accelerating trend stand to succeed the most.

There was one big change at the beginning of 2019 that seemed primed to throw open the gates to consumerism: price transparency. Yet, despite all the hype, the rule has landed with a collective shrug.

This was the first year that providers were required to post the prices of their services online. And that’s exactly what facilities have done, to varying degrees of success.

It’s the classic battle between letter of the law and spirit of the law. Hospitals have indeed largely complied with the letter of the law, posting their chargemasters for anyone who wants to go digging. But, as many healthcare experts could have told you ahead of time, these prices don’t tell the whole story, not even close.

Price listings also don’t speak to other factors that will affect the patient’s ultimate bill. They don’t consider the different rates negotiated between payers and providers. They don’t take into account how a procedure at an in-network facility may be overseen by an out-of-network physician, which can increase the patient’s payment responsibility.

My point is that price transparency still isn’t as crystal clear as patients want it to be. I don’t see this as impeding consumerism, but rather a first step in that direction. Patients will continue to query providers as to the cost of care, and the concept of “shopping around” will increasingly take hold.

This can be a bit of a sore subject, but physicians must balance their instinct or habit to order a litany of tests to ensure 100% accurate diagnosis with the need to order only the tests most likely to provide an accurate diagnosis. You can expect to see demand at imaging facilities to fall as consumers become savvier about their care needs and physicians reduce their referral rates. What’s more, expect to see patients become more vocal about where they’re being referred, something that puts the onus on imaging managers, technologists and other front-of-line staff to provide an exceptional experience so the patient comes back every time they need an exam.

I saw it firsthand at RSNA, and it bears repeating: 2019 may just be the year that artificial intelligence-powered imaging technology comes within reach.

Real-world applications that harness AI for the benefit of both patient and provider have grown increasingly commonplace. This is empowering providers like never before. In fact, we’re beginning to see attitudes around AI start to change for the better. Where previously there was concern about computers taking over the highly specialized roles of both radiologist and radiologic technologists, we’re now seeing enthusiasm for how these AI-enhanced systems can complement experts’ considerable knowledge.

For technologists, AI has the potential to automate workflows so the practiced motions necessary for every scan are preprogrammed based on each individual’s preferences, allowing them to speed through positioning and acquire images more quickly than ever before. Sonographers can pull up their preferred image composition and sequencing with AI guiding them along the way. And radiologists can rely on AI to surface the images most likely to provide the diagnostic results they need to make an accurate decision about patient care.

The use of AI will continue to grow over time, but 2019 may be the tipping point, where we see hospitals and clinics of all shapes and sizes bring these systems into standard practice.

Finally, we should note that 2019 is also going to be an interesting year for healthcare from a political standpoint.

The simple truth is that we probably shouldn’t expect many sweeping changes to the healthcare system to come from Congress this year. Democrats control the House, while Republicans control the Senate. In this environment, it’s not likely that a lot of major accomplishments will be achieved unless bipartisan discourse improves dramatically.

That said, we’re going to see an interesting conversation continue to take place about the role of government in healthcare and the role of healthcare in peoples’ lives. Republicans remain more or less dedicated to slowly peeling back the parts of the Affordable Care Act they think are changeable, even while many have resigned themselves to its existence in some form. They also remain committed to continuing the current capitalistic system of healthcare enterprise and the private insurance industry that enables it to function.

The other side, however, is a different matter. The Democratic party has been pulled to the left on a variety of issues, healthcare included. As presidential contenders throw their hats in the ring, it’s becoming increasingly clear that the preferred Democratic stance is “Medicare for All” – some kind of single payer system in which the government sets prices and provides reimbursements for everyone, not just those currently under its scope. The most prominent proposals provide an opt-in option that would keep private insurance in place yet allow those without it (or who find it unaffordable) to opt in to the government-run system.

No matter the final result (or, as final as anything can really be considering the ever-shifting nature of the legislature), the push and pull of healthcare reform will continue to dominate the conversation in 2019, and the debate will only grow louder as we come to a divisive presidential election in 2020. You can expect healthcare to be a main topic of political discourse, for better or worse, in the coming months, and that discourse could set the stage for further dramatic change within the field.

The Future Is Now

These are just a few of the big trends shaping imaging and healthcare in 2019. But because this is healthcare we’re talking about, things could shift at a moment’s notice. The old adage to “expect the unexpected” is one that administrators, executives, physicians and anyone with a career in this field should take to heart.

What is Interventional Pulmonology?
Read More >