Editorial: How the Election Impacts Healthcare in 2017 & Beyond

I can't count the number of times I've thought, “How'd we end up with these two?” (OK, four candidates for those of you who prefer the Libertarian and Green Parties.) Yes, Secretary Clinton and Mr. Trump have their good points and their bad points. My goal here is not to dwell on missing emails, vulgar comments, lies and the like, but rather to look at how healthcare might be impacted by the results of the elections this November 8th. And if you hang on long enough, I'll make some predictions at the end. 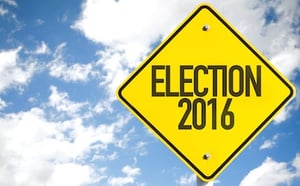 So let's start at the top—the Presidential election. We will end up with a chief executive that doesn't believe the Affordable Care Act (Obamacare) is the right answer. Yes, it has increased the percentage of Americans with coverage, and it, along with other market forces, has caused a full scale redesign of how we approach healthcare payment in the United States.

However, it didn't address cost in a direct fashion. It didn't fundamentally limit cost the way that Hillarycare (remember that from the 90s?) would have because there is no mechanism whereby regional boards decide how, when and where care will be rationed to control cost. There is no requirement that you either play in the government's system or exist entirely outside of it. As written today, it provides services to some essentially at the cost of others. There is no doubt that Obamacare was a massive expansion of federal entitlement spending.

There are also flawed pieces of the legislation. It was clear that part of the “genius” of the ACA—from a purely political view—is that the bill contains almost no detail on how any of it will work. It leaves all of that up to rule making by the Administration. While this makes the details of the law hard to attack before those rules are made, it also leaves ample area for challenges and mistakes during implementation. Take the exchanges, for example. We see rates going up 25 percent on average; the large players are pulling out; many Americans have no more than one payer to choose. Many, myself included, believe there is no way for the current exchange model to survive. Some have argued that this “collapse” is intentional. The far right wants to kill the whole law and sees collapse of the exchange as a step in the right direction. The far left also wants to see it fail. They view it as the most expedient way to get to a single payer solution. (They may walk it through a public option model as the first step, but full collapse could get them to the same place, probably faster.)

So what should we expect to happen after November 8th? The first answer is not much. Call me a cynic, but I don't see a governmental scenario that would allow for significant legislative movement on the topic of healthcare. On the one hand, Secretary Clinton wants to “improve” on the bill. Mr. Trump will repeal and replace it. With what? They both admit they want to change what's there, and their talk is really just political pandering to their voter base. They both want change, it's only a matter of degree.

The real political story—in my mind—is in the Senate. While everyone is busy watching the presidential polls in states like Ohio, Pennsylvania, Florida and North Carolina (and a few more), I'm watching senate polls in Nevada, New Hampshire and Pennsylviania. You see the balance of power in the Senate makes more of a difference in the ability to change healthcare than whoever is in the Oval Office. The control of the Senate will dictate the “view” taken on the future. Republican control will mean that legislation will focus on less regulation and more freedom for states, businesses and individuals. Democratic control will instead focus on pushing insurance through federal programs to ensure that most people are covered—no matter what the mechanism.

It's highly unlikely that the GOP would lose control of the House, and if they hold on to the Senate, you could expect a series of bills to be pushed for vote and potentially moved to the President's desk. These bills could change the definition of a work week, the composition or even existence of the Independent Payment Advisory Board and a series of other items that can be modified in the current legislation.

There is no political path to repeal without a Republican sweep in the House, Senate and Presidency. And even in that case, reaching a practical and workable solution to roll back what's been done would be nearly impossible. If the Democrats win the Senate and the Presidency, we should expect a whole different set of reforms. I would look for the public option to be discussed (though it would never pass the House), a federal push to get the remaining states to adopt Medicaid expansion (by increased incentives or flexibility) and an increase in requirements and penalties for employers providing insurance.

The challenge with all of legislation is that with divided government—the two parties each having control of at least one of the three bodies—bipartisan support will be required to get much done. So we're left with campaign talk blowing away like a dried, dead tumbleweed as soon as the votes are cast. Instead, we have to look for areas of potential collaboration.

I think there are a few that make sense. First of all, I believe the 21st Century Cures Bill will be passed in the lame duck session between the election and the inauguration. There’s a chance that we see tort reform, providing a cap to medical malpractice awards. This will have a major impact on the cost to practice medicine and will be more likely with a Republican-controlled Senate.

Second, I think we’ll see some sort of regulatory model to address prescription drug prices. Third, the reauthorization legislation that needs to be passed—such as the CHIP (Children’s Health Insurance Plan) reauthorization—provides an opportunity to tack on small legislative fixes. Options here include mental health and opioid support to the states through increased funding, a longer term Zika plan, and potentially something around long-term services and supports for dual eligible beneficiaries.

And at last, my prediction. While the FBI has certainly muddled the waters in the last few days, I believe we will see a second President Clinton working with a highly divided Senate that will have no more than a one-vote majority for either party—my guess is that it’s 50-50. This will create significant gridlock. I don’t want to speak too soon, but the fact that many Democratic Senators are up for reelection in 2018 will also make it harder for a split Senate to force votes on controversial measures. So healthcare will consist of some small changes and quite a bit of opportunity lost through stalemates in committee. Healthcare will take a back seat to jobs, immigration and the economy as the public face of the new administration. The biggest issue to watch will be whether enough can be done (or should be done) through administrative regulation to save the exchanges.

Part I: Healthcare Reform Beyond the ACA
Read More >