When Account Executive Kathy Osborne was a kid, she visited a client hospital with her father, Ken Vetter, a man instrumental to the company’s initial success. While there, she got a firsthand look at the X-ray machines and other equipment that Cassling Diagnostic Imaging has been supplying to hospitals for upwards of three decades.

She was immediately intrigued by the imaging equipment. Later, after graduating from college, she informed Ken that she wanted to follow him into the family business, forging relationships with healthcare providers and providing them with imaging equipment that would ultimately make a positive impact on patient health.

At first, Ken was reluctant to bring Kathy onboard. Anyone who knows Kathy, however, knows how persistent she can be. As her father put it, “she knows what she wants and she goes after it.”

Clearly, Kathy got the job at Cassling (according to Ken, “When I wouldn’t hire her, she went over my head to Bob and Mike Cassling.”). Her persistence has served Kathy well as an Account Executive for the Midwest territory. This year, she celebrates 20 years of winning new customers and solidifying relationships with existing ones. Throughout her time here, she’s consistently put forth a tenacious yet collegial attitude that has won her fans at Cassling and at hospitals around the Midwest.

On her anniversary, those who know Kathy best spoke about what an asset she is to the Cassling sales team.

“I always enjoy running into one of Kathy’s customers,” said Andy Beer, Vice President of Sales. “I see how excited they are to see her and find out what is new with her family. There is nothing more satisfying as an Account Executive than having great relationships with your customers inside and outside of work. Kathy has many, many long-term relationships with her customers, all based on years of taking care of their imaging needs. Congratulations on your 20-year anniversary Kathy!” 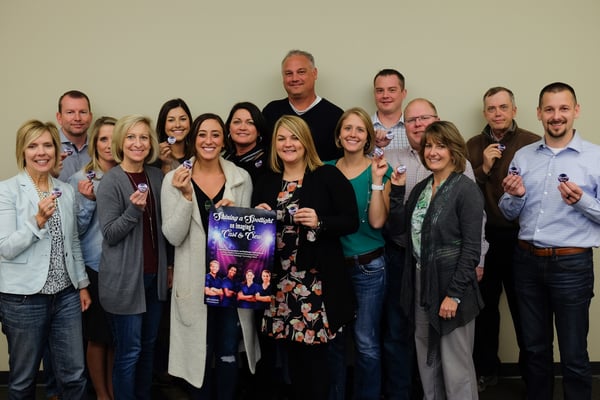 “Kathy truly embraces the Cassling culture of taking care of the customer,” said Kim. “She brings so much value to the Midwest team by demonstrating the attributes of an ultimate team player: humility, hunger and people-smarts.”

Her fellow account executives also heap praise on Kathy for her ability to provide hospitals with the sorts of innovative solutions to their problems that ensure those facilities remain customers year after year.

And others compliment Kathy on the impact she’s had not just on business results, but on the personal lives of those within Cassling as well.

“Kathy’s compassion and kindness within our Cassling family and with her customers is something I greatly admire,” said Account Executive Courtney Glover. “We all feel extremely lucky to call her a co-worker, but even more fortunate to get to call her a friend.”

“It’s been such a rewarding experience watching Kathy succeed and excel at the company that her father helped build,” said Mike Cassling, CEO. “Her dedication to customers is second to none, and she always brings out the best in those around her. She deserves the utmost congratulations on this important anniversary.”

It goes without saying that all of us at Cassling are glad that Kathy went over her father’s head to land her job two decades ago. And we are honored that she has continued to bring that dedication to her role each and every day since.

We end with parting words from Kathy’s father, Ken Vetter, whose name graces a room within Cassling’s Omaha headquarters: “Kathy is a wonderful daughter who loves and cares about her family. We treasure her. From an early age, she has been interested in what I did. Her mother and I have enjoyed watching her grow and do what she loves.”

We hope Kathy will continue to do what she loves here at Cassling for many years to come. Congratulations on 20 fantastic years!